Dance into the fire

I think I've mentioned before that took ballet lessons when I was a kid. I started at one dance studio and when I got older I switched to a school that was more ballet focused. The instructor was kind of mean though and we suffered some humiliation and abuse from her. She was probably dishing out what she was given when she was a dancer. I ended up quitting because of it but the whole dancer aesthetic is still very appealing to me.

Maybe that's why I liked this skirt when I bought it. I've had it over over a year and this is the first time I've worn it - maybe because it's too "dancer" and not "bureaucrat", not that that's really stopped me before. 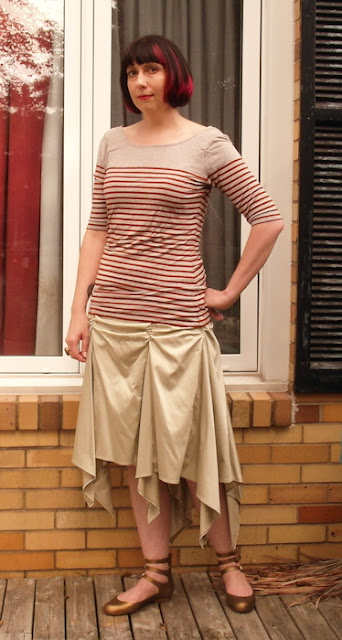 This is a little more make-up than I would usually wear on a Saturday morning and I wish I could say I'm going to a party or something all WHOOOOO! but I'm not. In fact I had no plans until about 15 minutes ago when my neighbours asked if I wanted to go to the animal shelter with them this afternoon.  It's the shelter where the dear departed Jetta came from so I'm concerned I'll come home with another furry friend. 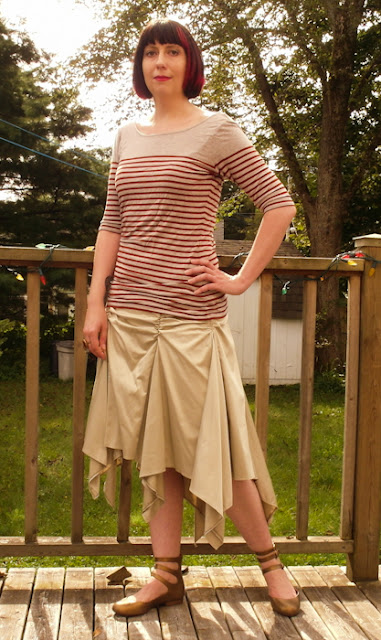 What, isn't this outfit appropriate for a few hours of playing with kitties and doggies? Who cares! It makes me feel pretty.

I'm dealing with an unplanned shoe "capsule" right now so you're going to see a lot of reruns until I get my shoes back.
Posted by Megan at 10:14 AM