This is one of the three outfits I wore yesterday. The changes were mostly weather based since it was cool in the morning, cooler in the evening, but in the middle of the day it was sunny and nice. 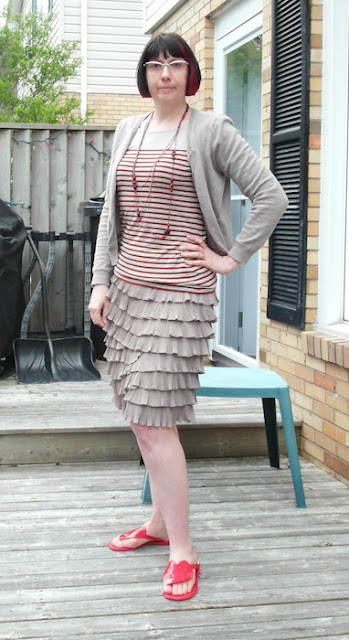 I had to run downtown to drop of some clothes at the consignment store and this skirt was originally in my "give up" pile. I had second thoughts so I thought I'd give it another try. I think I'll keep it now.

I think I was going to give it up because I remember it being shorter than this but since it's knee length I think I can get a lot of use out of it this summer.

While I was at the consignment store, I picked up some white/blue striped trousers for $30.00 which I'm looking forward to wearing as soon as possible. 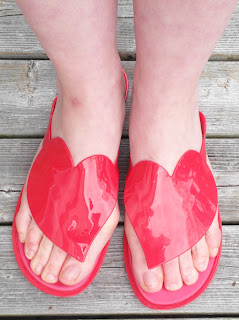 I'm not usually a fan of heart shapes but I like this stylized version from Vivienne Westwood.  I got them on sale a few weeks ago from Ginza Queen and it hasn't been close to warm enough to wear them until yesterday, at least for a few hours.

Time for a pedicure!

OH, and a big SHOUT OUT to Izzywizz in Norway, the latest to join the photo trend of "fashion bloggers under their desks". =)
Posted by Megan at 5:21 PM