This is the second dress that I ordered with my gift card from eShakti. It's called the confetti dress which is a pretty apt name.

The dress is nice but the shoes really outshine everything else. Or maybe the tights. I was walking down Queen St at lunch time and two women in a restaurant pointed at my feet so I stopped and did a little "ta da!" pose for them. Shameless! 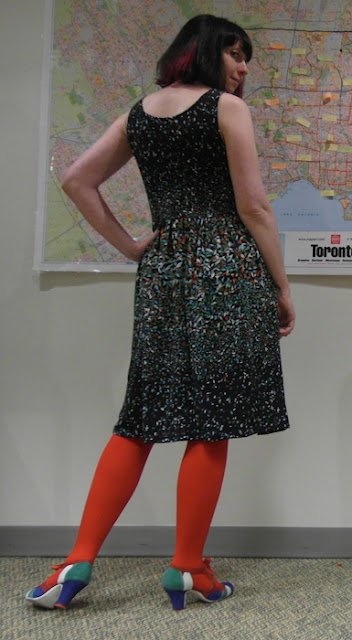 I'm back in boardroom 3A today with my map since the lunchroom has apparently become a hotspot for eating and crafting. Don't they know I need that space for my photo shoots?? I'm going to start blocking the room off as a space for important meetings in the late afternoon.

Currently watching the hockey game and the Leafs are beating the Bruins 4-1 in game 7. Totally unexpected! The Leafs haven't been in the playoffs in 9 years and weren't expected to make it past the first playoff round. There's still 11 minutes left in the game so I hope they can hold on and eek out this win!
Posted by Megan at 9:13 PM